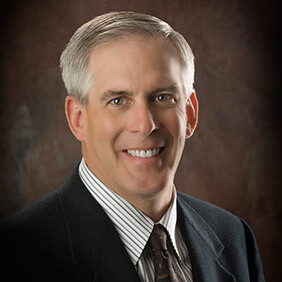 Originally from Forest Lake, Minnesota, Dr. Geoff Iverson earned his undergraduate degree at the University of Minnesota in 1977. He then continued his education by completing his DDS degree at the University of Minnesota School of Dentistry in 1981. During his final two years of graduate school, he worked as a dental lab technician and upon graduation was honored with the Academy of General Dentistry Service Award. Following graduation, Dr. Iverson purchased his current family practice in Montgomery. In 1997, he expanded and remodeled his office building to accommodate a growing number of patients who he treats with comprehensive, state-of-the-art dental care.

Throughout his career, Dr. Iverson has participated in many professional organizations and projects. He was part of a GeoDigm Corporation focus group that clinically evaluated the development of computerized crown design which is now routinely done in dental labs. From 2005-2010 he served on the Minnesota Dental Association’s Scientific Sessions Committee,   which organizes the continuing education programs for the annual Minnesota State Dental Convention, and he was the chair for the 2010 program.  Additionally, Dr. Iverson served as a Clinical Professor of Operative Dentistry at the University of Minnesota School of Dentistry for seven years. He currently holds memberships in the American Dental Association, Minnesota Dental Association, Minnesota Academy of Comprehensive Dentistry, and Southern District Dental Society.

Dr. Iverson and his wife, Peggy, have two sons, Eric and Ryan. Eric earned his Juris Doctor degree from the University of Minnesota Law School in 2016 and is employed with Maschka, Reidy and Reis law firm in Mankato. Ryan is a senior at St. Olaf College and will be graduating in May 2017 from St. Olaf College in Northfield, MN with a degree in exercise science.  He will be attending graduate school for physical therapy in the fall of 2017.   Peggy is a fourth grade teacher at Montgomery West Elementary and is the family’s number one fan, watching her boys play baseball in the spring and summer. Dr. Iverson enjoys spending time together with his family and watching the boys compete in amateur baseball.  He is the president of Titan Youth Baseball and is involved in many activities for the program. Additionally, he enjoys golfing and umpiring for the MSHSL and summer league baseball games.